YOUR BAND IS A VIRUS 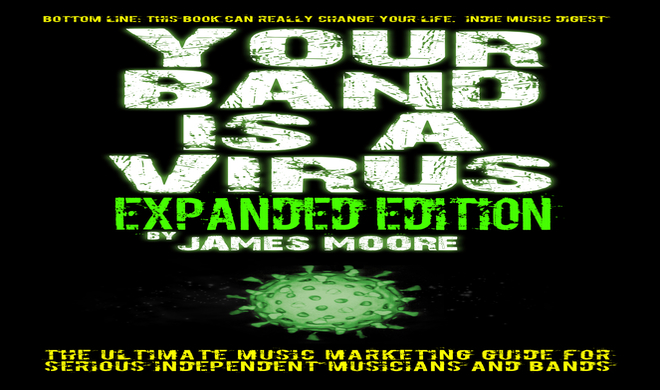 I have the pleasure of sharing James Moore's book with all the Omari MC fans!

You guys know I always stress gaining as much knowledge as you can about marketing your music, and James Moore is very well versed in the field.

He runs independentmusicpromotions.com and has helped thousands of artists through his site! This one is worth the read.

As featured on Indie-music.com, Think Like A Label, I Am Entertainment Magazine, Antimusic.com, and recommended by countless music publications, "Your Band Is A Virus! Expanded Edition" is the bigger and better version of the best selling book "Your Band Is A Virus - Behind-the-Scenes & Viral Marketing for the Independent Musician". At double the size of it's predecessor, it is the ultimate music marketing guide for serious independent musicians and bands.

Independent musicians in 2012 find themselves more confused than ever before. "Your Band Is A Virus - Expanded Edition" presents a complete paradigm shift in both the way artists promote and why they do it.

Advocating breaking the rules, bringing truly original expressions to the world, encouraging controversy, timing a release for optimum impact, promoting to music publications with his behind-the-scenes method, taking advantage of the user-generated revolution with a freelancers army, properly marketing music videos, embracing the free music model, and thinking outside the box, "Your Band Is A Virus" presents an actionable and inspired approach to music marketing coming from James Moore, founder of Independent Music Promotions. James's words have been shared by the likes of CDBaby, Reverbnation, the Lefsetz Letter, the Indie Bible, Indie-Music.com, the DIY Daily and Buzzsonic.com.

"The intention of the book is to completely wipe out many of the misconceptions musicians have when it comes to music marketing. I'm a music promoter. This book wasn't written by an entertainment lawyer or a label CEO. I'm DIY and I write about what has worked for me, and many of the ideas I'm happy to say just don't get talked about anywhere else. It's all straight talk and actionable advice. Musicians have the most trouble and confusion about generating press, so that's what I focus on. There's a lot of misinformation out there, so I hope this book inspires and brings clarity to artists" says Moore.

HELP YOUR CAREER AND GRAB THE BOOK BELOW!

Don't Be Shy! Hit the Like Button and Speak Your Mind

Why Your Music Will Go Nowhere On SoundCloud <READ MORE>