Fanbase App Review: Legit or Waste of Time for Artists?

The music industry has undoubtedly made some major shifts in the last decade or two. Social media has become king and the way artists use it to their advantage largely depends on the outcome of their careers. Musicians once built their fan bases and revenue streams from touring and performances whereas now, the majority of artists develop their following on the internet first and break into the business as a result.

Having a strong fan base is arguably the most important key to having a successful career as a musician. Of course, you need decent music or some sort of talent to reach an audience, but the truth is — most artists with the biggest followings are actually the least talented musically. Their talent is in marketing, networking, and finding ways to make and keep fans.

The music industry doesn’t make money from your music, it makes money from your audience. If there was no audience checking out your music, there would be no money. This is why it is so important for artists to develop their following and constantly engage with their fans in order to have a sustainable music career.

We all know about using platforms like Facebook, Instagram, Twitter, and TikTok to promote music, gain followers, and connect with fans. Social media is an extremely effective tool for increasing fan engagement, which is a necessary part of being an artist in today’s industry. However, there is a problem creators face on average social media platforms — the inability to monetize from their content.

Since being active online is such an integral part of being a successful artist, you would assume there would be more options available to make money from your online activity. Yes, there are streaming royalties that sites like Spotify and Apple Music pay to artists, but these royalties are only fractions of a penny and it’s nearly impossible for the average artist to earn an actual living from streaming royalties alone.

More and more musicians are becoming independent nowadays, which means they don’t have the financial backing of big record labels and need multiple different revenue streams to stay afloat. With the world largely revolving around social media and everyone spending so much of their time on it, it makes sense to use it as another form of monetization.

Unfortunately, creators with great content and large followings have been unable to adequately monetize their success on popular social platforms. The small number of creators who are able to make money from their content have to jump through many different hoops and follow certain rules in order to get paid. The few who do manage to get paid are still not paid well.

Big social network companies are getting rich off of the creativity of their users and don’t allow the average user opportunities to monetize. The creative economy on social media has been extremely unfair and monopolistic — that is until now.

Fanbase is a new frontier in social media that helps creatives monetize their content and allows users the opportunity to earn consistent revenue via their ‘fanbase’. Entrepreneur and Fanbase founder, Isaac Hayes III wanted to bridge the gap between traditional social media sites with the monetization aspects of other subscription-based applications, thus creating Fanbase which now gives users the best of both.

The new platform has the same framework as a fully functioning social network where users can post photos, videos, live streams, and other content for followers to access for free but can additionally earn revenue from posting exclusive content that followers pay to see.

Users have a huge range of possibilities for posting different sorts of content like you would find on other platforms, but Fanbase initiates following tiers that give users the choice between a free, base option, and a higher paid subscription follow for more content

There is also the ability to like and love content — ‘like’ being free engagement and ‘love’ representing a tip of a half of a penny. Users can buy packs of Love through the app and creators get paid out each month for the love, tips, and subscriptions they receive.

The seed-funded social platform has raised more than $3.5 million in microdonations and has over 5000 investors including Snoop Dogg, Charlamagne Tha God, and Real Housewives of Atlanta star Kandi Burruss. Since launching in late 2019, the app has around 50k users and a $23.5 million current valuation.

The original idea came to Hayes when he began to see how much time, effort, and creativity people were putting into their social media content without getting substantive compensation for it. He also aims to empower Black creatives by removing roadblocks like algorithms and shadow-bans that other platforms use which has curtailed creators’ potential. Hayes wants to maintain equality of every user and create an even, level playing field for everybody on the platform.

Fanbase is available for download in the Apple App Store and Google Play Store. It is extremely user friendly and easy to navigate the app — resembling Instagram in features. Anyone can sign up and post content of their own and follow other users for free and/or subscribe to exclusive content you create for $3.99 a month. You can also purchase subscription packs for 3 people at $11.00 a month or 5 people for $19.99 a month.

Fanbase splits all revenue earned between the creator 50/50 and deposits it directly into your bank account the first of every month. In order to collect your money from the app, you’ll be required to put in your banking information as well as some information for tax purposes.

On Fanbase you can ‘Like’ posts just like you would on Instagram or you can ‘Love’ a post. Likes are free and Loves give the content creator half of one penny per as a way to show appreciation in the form of a small donation.

A great feature of the app is that you can import content from Instagram and TikTok directly to Fanbase. So if you are already posting on those two platforms, you could already be making money from your posts on Fanbase!

Fanbase is an extremely innovative social media platform that benefits artists and creators of all types. We definitely recommend anyone joining and begin earning money from the content you already post on other social sites. Especially for independent artists, it's important to have multiple revenue streams in order to survive. Fanbase is not only a great platform to continue growing your following and sharing your music, but it's now allowing artists to get paid directly from it — something we haven't seen from other popular social networks. Sign up for Fanbase today, we promise you won't regret it. 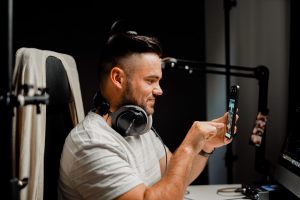 How to Get Your Music On Instagram Stories & Reels (Quickly)